This is a guest post by Philip Morgan of My Content Sherpa, subscription authority building for busy technical firms.

Upgrading from Mailchimp to Drip Ecommerce CRM is a lot like upgrading from a tricycle to your first bicycle. At a certain point, most businesses will outgrow their basic ESP, and need more tagging and automations to take their list to the next level.

To really hit the ground running with Drip, though, you need to understand a few big conceptual differences between it and Mailchimp. The five big ones are:

In Mailchimp, lists are the hinge that every feature swings on.

Mailchimp users very quickly get used to the idea that the way to group people together is to create a list or a segment. If you need more than one group of people, you’ll either segment a list or create an additional list.

What’s Different About Lists in Drip

Drip has the concept of a list, but handles it differently.

In Drip, you have only one list per account (though you can have multiple accounts per subscription to the software). Every email address that has ever opted in is on that one “global list”, though addresses that have unsubscribed or been manually removed are not active on the list.

So how do you group addresses together if you want to send email to a subset of the global list? There are several options, depending on your needs:

A Drip campaign is a sequence of emails that you ask people to subscribe to via an opt-in form. After someone subscribes to one of your campaigns (you can have multiple campaigns), they are both on your global list and subscribed to the campaign they opted in to.

It doesn’t really matter what campaign they opted in through, they’re on your “global list” of people to email.

Did any of you Mailchimp users just get vertigo right there? 🙂 I kind of did, too, the first couple of times.

Don’t worry. Drip gives you many useful ways of accessing that “global list”:

With Great Power Comes… the Need to Configure a Few Things

Drip campaigns are timed sequences of emails sent to people who subscribe to the campaign through an opt-in form. This makes campaigns the functional equivalent of Mailchimp autoresponder sequences with one big difference.

In Mailchimp, people join your list, and then an autoresponder may kick in (up to an hour later…). Again, the list is the hinge that all other features swing on in Mailchimp.

In Drip, people join your campaign, get the campaign emails–starting immediately, if that’s how you’ve configured the first email. Then after the campaign is finished, those people are both associated with that campaign and a member of your global list. This may sound obvious to you, but it’s an important point.

For example, what happens if you create a campaign with 3 emails, then months later add a fourth email to that campaign?

Answer: That fourth email goes out to people in that campaign on the interval you specify.

If you set up that fourth email to go out 3 days after the third email, even if it’s been months since the last person joined that campaign and received email number 3, they (and everyone else associated with that campaign) will receive email number 4 three days after you set it up and publish it.

This is by no means bad, and in fact, I think it’s a smart default. Not everybody is going to get their campaign fully set up before people start opting in, and even if you do, you may want to modify it later by adding new items to it.

But… do keep in mind that new emails added to campaigns will get mailed out to campaign members.

Here’s where this can catch you by surprise.

Again, the default behavior is for campaign members to remain part of the campaign, even after they receive the last email in the campaign. You can change this with Drip’s automation if necessary.

In other words, it’s very easy to accidentally email people when you tweak or add new emails to a campaign. This probably only happens to those of us steeped in Mailchimp terminology who are still thinking of Drip campaigns as Mailchimp autoresponders. But that’s me, and I bet it’s a lot of you!

Here’s a super simple decision checklist to help you steer clear of this issue:

Opt-In Forms Are on Rather Than off by Default

If you’re a Mailchimp power user, you probably have multiple lists and multiple autoresponders. When you migrate to Drip, you’ll probably set up multiple campaigns (because Drip campaigns are the functional equivalent of Mailchimp autoresponders) but again, you’ll have just one global list.

If you’ve set up the Drip javascript site code snippet on your site and created at least one Drip Campaign, you’ll automatically have campaign popup widget forms throughout your site. In that way, Drip opt-in forms are “on by default”. Of course, you can still use third party integrations or your own embedded form code as desired. 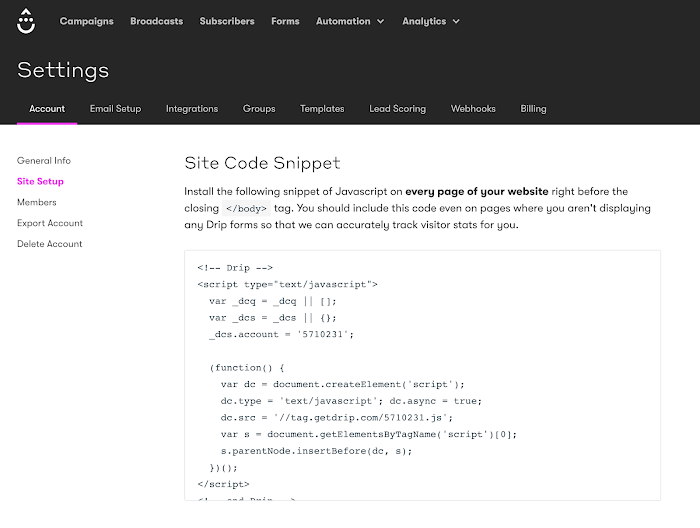 But if you have multiple Drip campaigns, you need to configure a few things so that the Drip popup widgets behave correctly.

It’s probably obvious by now, but let’s talk explicitly about Mailchimp campaigns for a bit just in case.

The Drip equivalent of Mailchimp campaigns are Drip broadcasts.

Drip can send a broadcast email to: 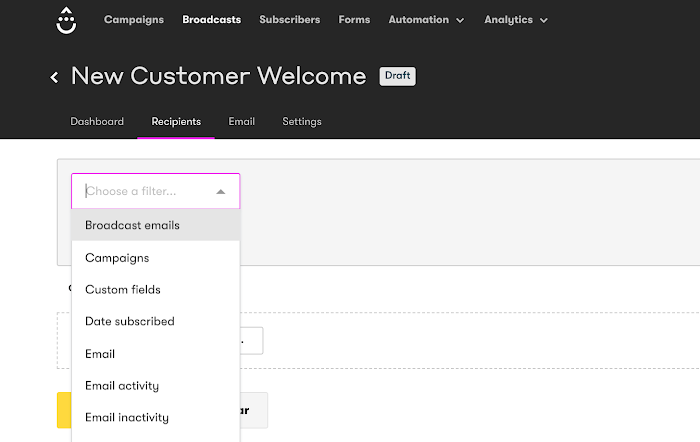 Like Mailchimp campaigns, Drip broadcasts can be sent immediately or scheduled to send at a specific date/time.

One difference you will notice is that Drip broadcasts are marked “read only” after they are sent or scheduled to send, and there is no 1-click way to duplicate a sent Drip broadcast.

Finally, we have the subject of templates. There are some significant differences between Mailchimp and Drip in this area.

Mailchimp presents you with tons of out-of-the-box templates, and Drip supplies one.

There’s a lot of data out there that says the kind of emails that perform the best from a marketing perspective are:

Drip’s out-of-the-box template has no chrome at all, just a solid, mobile-friendly design with nice typography and layout defaults. It looks just like an email from a friend.

In other words, Drip has reflected email marketing best practices in their default template.

Mailchimp, on the other hand, gives you tons of template choices. This has the potential to overwhelm you with choices and reduce the performance of your email campaigns. But if you prefer drag and drop template building, or an extensive template library, you’ll likely be happier with Mailchimp.

Drip allows you to create additional templates by simply pasting in your template HTML.

In Drip, automation wears many different hats. From making decisions about which emails to send, to recording conversion goals like purchases made—Drip’s automation can nearly do it all.

To set forth an automation sequence in Drip, simply set up a new Workflow and select its trigger. You are able to choose from a multitude of triggers, like a new person submitting an opt-in form, firing off a custom API call, to taking an action in one of the many integrated technologies such as Leadpages or SamCart.

Example of a SamCart Workflow

In Mailchimp, an automation is chosen from predetermined, situational configurations, and is tied to a list and a particular email. Drip automation is completely customizable from the first action you set in place, and automation Workflows are sharable. This means that you can easily upload workflows to your account that others have built, or send your workflows to others. There are seemingly endless possibilities when it comes to setting up automation in Drip.

Here’s the boiled-down, basic TL;DR of the conceptual differences between Mailchimp and Drip.