For checkout page software company SamCart, the decision to switch to Drip was a crucial decision at the last minute. SamCart couldn’t afford to make any mistakes leading up to their launch earlier this year, but they took the calculated risk to switch to Drip.

And it paid off big.

SamCart makes it simple for users to create customized checkout and upsell pages. Leading up to their big launch, SamCart wanted a marketing automation platform that was as user-friendly as their own checkout pages, and had the segmentation they needed to send daily broadcasts to only the subset of their subscribers who expressed interest in SamCart.

About a month before their big launch, the founders of SamCart heard about Drip. According to Cofounder Scott Moran, within 30 minutes, they knew Drip was the tool they needed.

Drip let us do enough of the advanced stuff that we knew we needed… while keeping the UI simple so we didn’t need to hire a consultant to use it.

Scott and his brother and business partner, Brian Moran, promptly migrated from HubSpot to Drip, just weeks before their 7-figure launch.

Note: if you want to use Drip for your next launch, you can get started for free (up to 100 contacts).

Click Here to Start Using Every Drip Feature for Free

They had experience with AWeber, Infusionsoft and HubSpot. And while each of these platforms offered marketing automation, they weren’t user-friendly enough for Scott and Brian to use while their developers were busy building SamCart.

We’re pretty smart guys, we take lots of action, and we’re always trying new marketing tools, but Infusionsoft was just this big, complex tool, and we were totally unable to use 99 percent of it.

They made the switch to HubSpot, which they used for about two years, until they found Drip. Again, the biggest hurdle was usability.

We were so excited by all the different features. But over time HubSpot kind of soured as well. While it’s a lot more user friendly, it was still too complex. We really wanted the promise of building funnels as easily as drawing on a whiteboard.

Moving to Drip weeks before a huge product launch was risky. But it was a smart move for SamCart, Scott says, because of the time Drip saves for their team. With all the tasks involved in founding and running a business, there’s no extra time to invest in tools that are complicated or difficult to use.

As someone who keeps an eye on how he’s spending his time, Scott realized that he was investing too much time in learning these huge marketing automation platforms and shooting himself in the foot.

When it starts wasting our time because this is a big tool that is just sucking up time, there’s a point of diminishing returns.

So, when Scott and Brian found Drip and discovered how simple the UI was to use, they quickly imported their email list into Drip. With the ability to segment users based on video views and the functionality for both automation and broadcast emails, Drip helped Scott and Brian execute the launch seamlessly.

Here’s how they did it.

1. Send Daily Emails to Move Prospects Through a Series of Videos

At the center of the SamCart launch was a series of three videos, a la Jeff Walker’s Product Launch Formula.

SamCart sent these three pre-launch videos to subscribers starting two weeks before the cart opening. The cart was only open for four days—from Monday to Thursday evening. Here’s what those three videos looked like (notice the tabs at the bottom of the screen). 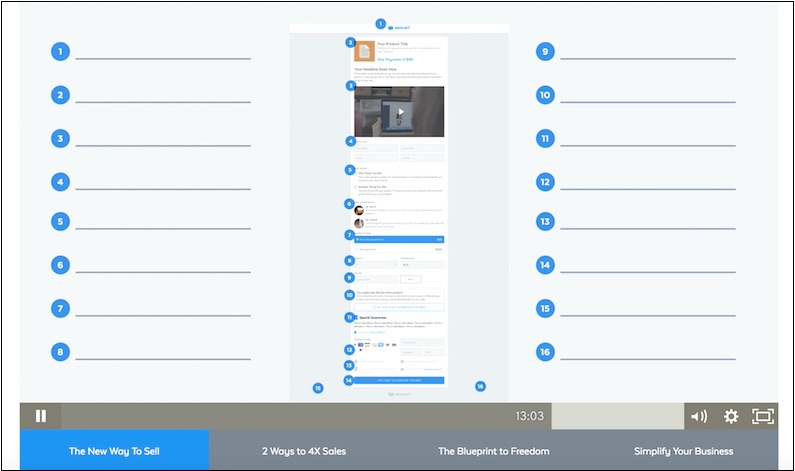 At the end of the first video, SamCart teased this 16-point breakdown of elements of a checkout page, to get viewers excited for the next video.

Once subscribers had watched the first video, SamCart’s team set up Drip so those subscribers no longer received emails about that video. They did the same with the second and third videos. But the emails weren’t all the same for each video, Scott said.

We’re not going to talk about angle A over and over again in our emails if that angle didn’t get them to watch the video the first time.

In other words, Scott and Brian didn’t just blast their whole list with three videos, several days apart, regardless of whether or not people were engaged. Instead, he sent consecutive emails pushing people to video #1, until they watched it. Then they moved on to video #2, and so on.

Then Scott took this 1-to-1 personalization a step further.

2. Tag Video Viewers Who Watch At Least 20% of a Video

SamCart used automation tool Center to track whether or not subscribers had watched any of the three videos that they sent. When someone watched 19 percent of a video in Wistia, Center applied a tag in Drip that simply identified them as a viewer of the video. 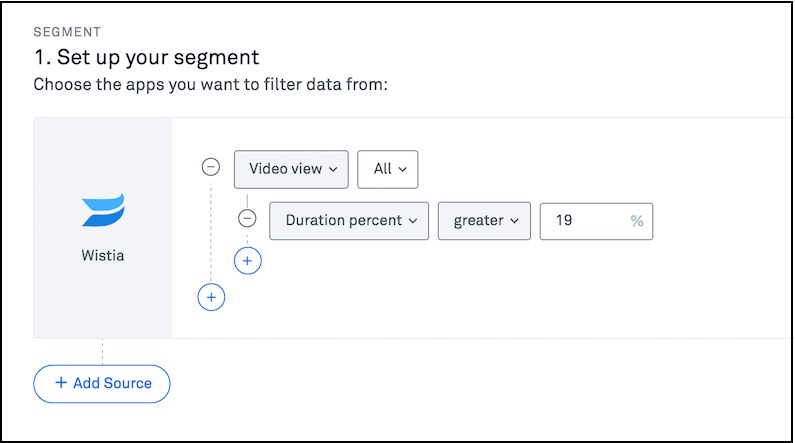 The tags would simply says “watched PLC1,” for instance, for those who watched at least 20 percent of the first video.

Subscribers who viewed the video and were tagged accordingly were removed from the ongoing daily emails. The SamCart team did this simply in Drip, by creating daily broadcast emails but excluding those tagged with “watched PLC1,” for instance.

Each video played a crucial part in the pitch, Scott explained, so it was important strategically to ensure that people saw it, without bombarding those who were engaging with the same content repeatedly.

If you haven’t watched the first video, it’s imperative that you watch it, so we were going back those first 5 days we’re mailing everybody back to PLC 1, excluding people who had already watched it, based on tags.

Of course, it’s not a good strategy to ignore prospects who are engaging with your content entirely. Those who were tagged in Drip after watching the video continued to receive teaser content about the next video, as well as when to expect the next video and the launch date. Scott said this was crucial to keep SamCart’s “super fans” engaged throughout the launch.

As for the people who had taken action, we weren’t hammering them over the head with something they had already seen. But we were still able to prepare them for what was coming next.

Those who engaged with the videos got a free trial offer.

We weren’t going to ask anyone to start a free trial if they weren’t even interested enough to watch the pre-launch content. For folks who were engaged, we gave them a chance to try SamCart.

Pro Tip: If you have a segment of contacts who have heard about your product but still haven’t bought, consider moving them into a nurture campaign. But for folks who watch every minute of your videos, send them “teasers” for upcoming videos to build excitement. If you need an easier way to segment subscribers by engagement (without Wistia and Center), check out Lead Scoring.

If daily emails seem like a lot of contact, Scott acknowledges that “we’re a little bit persistent with our emails.” But the hope was not to be spamming subscribers, but encouraging them to take action, especially during a big launch like this.

This also meant list cleaning, which SamCart does regularly with subscribers who haven’t opened an email in 60 or 90 days.

Luckily, Drip can help automate this process, to keep your list full of active readers, not just people who may no longer be interested in hearing from you.

Through this strategy of daily emails, 1-to-1 personalization, and more advanced content for prospects who were engaged, SamCart engineered a 7-figure launch. From a  list of 25,000 opt-ins, SamCart signed up over 3,000 new customers.

Drip was a big shift for SamCart right before a big launch, but it was a shift they needed. They moved from complicated systems they had used previously to a simple system that doesn’t require any special skills or consultants to use, according to Scott.

Honestly, the really big benefit is that Drip was just simple. It was everything we needed to get the launch done and nothing else, so that was huge.

While Scott admits that the shift to Drip was a bit of a last-minute decision before a huge month for them, he says it was worth the risk.

People are just afraid of losing, and that’s the worst reason to not make a change. You can’t switch tools in business without risk, but Drip makes it as close to risk-free as you can get.

If you’re ready to automate your own next launch with Drip, get started here:

How could you use 1-to-1 personalization in your own launch? Have you tried using Center and Drip to integrate your marketing stack? Let us know in the comments.