This is a case study on how one of our customers, Adrian Rosebrock of PyImageSearch, uses Drip to increase profits with email marketing.

In this post, Adrian shares how Drip played a crucial role in making his Kickstarter campaign successful.

Hi, my name is Adrian Rosebrock. I run PyImageSearch.com, a blog dedicated to teaching developers, programmers, and students computer vision. Computer vision is a field of study that includes methods for acquiring, processing, and interpreting the contents of an image.

One of my products is a course called PyImageSearch Gurus. You may have read about my specific Drip setup in this customer success story.

But what you may not know is that I funded this course (and validated the idea) using Kickstarter. 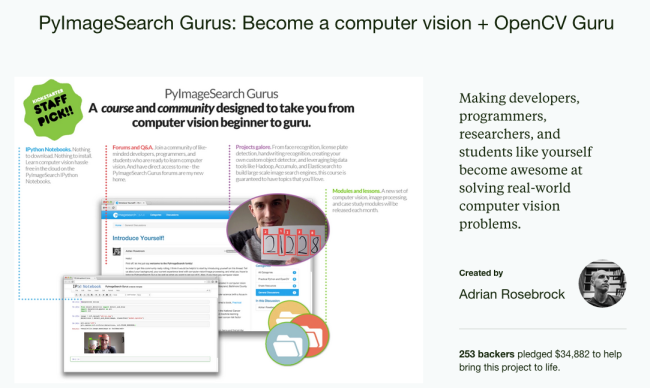 Email marketing, and Drip specifically, played a critical role in the success of this campaign.

As the Kickstarter launch date was approaching in mid-January 2015, I started sending emails to my readers showing what they were going to learn in my course.

These weren’t promotional emails. And they weren’t direct sales emails either.

They were simply educational, laying out the facts, and saying “Hey, if you’re interested in taking the next steps with computer vision, I’m launching this Kickstarter — it would be awesome if you would join me in backing the project.”

While I don’t have any real numbers to back this up, I often hear in my own micropreneur circles that founders only send out 2 emails prior to their product launch. The first email normally goes out 1 week before the big launch, announcing the product launch date and instructing readers to keep an eye on their inbox. A second email will normally go out the day before the launch, normally as a reminder. And then we have the launch day email itself.

And I think following this template is a huge mistake.

Only sending 2 emails to promote your launch is far too low. There is only so much you can (reasonably) say in 2 emails. And perhaps more importantly, you have no real chance to build urgency.

When I launched my Kickstarter campaign, I decided to send 5 emails with a final launch email at the end of it using the following campaign structure:

To be honest with you, I wasn’t sure how the Kickstarter was going to go over. I was extremely nervous about it — the final two nights building up to the big day I was barely sleeping from the anxiety. I had invested over a month of my time and I really wanted my investment to pay off.

This lead to questions such as:

The results were overwhelming.

As I mentioned above, I activated the Kickstarter campaign at 9:55am on January 14th, 2015. I needed to activate the campaign a few minutes before the 10:00am launch time I promised so that I could put the link in my Drip broadcasts, tweets, Facebook posts, etc.

And not even 60 seconds after I clicked the “LAUNCH” button on Kickstarter, I saw something magical happen in my inbox:

I was already getting Kickstarter backers at 9:56am!

But how was this possible? I didn’t even email the link yet, let alone Tweet it or Facebook it! How were my readers finding the campaign?

The answer was Kickstarter. They were on the Kickstarter page, hitting the refresh button, ready to become a backer — because they all wanted the early bird rewards.

Would the PyImageSearch Gurus Kickstarter have been successful without Drip? I don’t know. Maybe. There certainly are other email marketing solutions out there.

But I do know this — it would not have been as funded as easily and quickly without the power of Drip. Between the automation rules, broadcasts, and campaigns, I owe a lot of the Kickstarter success to Rob, Derrick, Andy, and their team.

The Final Word: Love Your Subscribers

Which brings me to my parting words — love your subscribers.

Deliver value to them. Be respectful to them. And at the same time be able to demonstrate your knowledge and expertise in a way that impacts their lives in a meaningful way.

Do that, and you’ll have more than a website and an income — you’ll have a loyal community.