I’ve seen more than my fair share of bad popups on the Interwebs recently, so, today, I want to put the world right by sharing my favorite popup copywriting examples.

More specifically, I’ll share why they’re effective, the psychology behind them, and how to improve your popup copy if you’re already using popups.

1. Use “Character Copy” (The Humane Society of The United States)

2. Use Your Ideal Buyer’s Language (BarkShop)

1. Use “Character Copy” (The Humane Society of The United States)

You might assume that you need to write copy from the perspective of you, the writer, or on behalf of the brand you’re representing. And ninety-nine percent of the time, you will be correct in that assumption.

But on rare occasions, if you know your audience well, and you want to try something different, it’s worth writing from the viewpoint of a “character,” fictitious or otherwise—even if that character isn’t human.

The Humane Society of The United States is a great example of a brand using a character copy in a way I haven’t found online before. When you go to leave its site, you see this exit-intent popup.

Opening with an emotionally-evocative headline (“I deserve a better life”), the non-profit writes its plea from the perspective of a puppy. “Right now, animals like me are suffering in puppy mills, research labs, and factory farms. Join the fight to protect us,” invites the canine before asking you to “donate now.”

The message is powerful, no doubt, but the psychology behind it is even more interesting. We’ve all made excuses to high-street charity workers, but a suffering animal, pleading for help? That’s much harder to reject.

Do you have to rewrite your copy from the perspective of an animal? Not necessarily. But if you’re in a market where your target demographic is inclined to say no on autopilot (as they often are with non-profits), it might be enough to pull on their heartstrings long enough to get some much-needed donations.

2. Use Your Ideal Buyer’s Language (BarkShop)

I would be remiss if I didn’t mention BarkShop in an article on good copywriting best practices. We’ve written about the brand before (here and here) thanks, in part, to its ability to write and speak like its ideal buyers: dog enthusiasts.

In its email popup, for instance, the brand offers 10 percent off your next order by asking, “Got a good doggo?” before assuring you, “they deserve all the goodies.”

While there’s a lot to admire about the form’s catchy design, what I most gravitate towards is its headline. Not only does BarkShop use its target buyer’s language, but it also asks a preloaded question that few dog enthusiasts would say no to. (Who doesn’t have a good doggo?)

You’re likely already using language that resonates with your ideal buyer on your product pages, in your email campaigns, and throughout your other marketing materials. But if you’re not using them in your popups, it’s worth considering, if not split testing.

Like many websites, Brain Pickings targets abandoning website visitors with an exit-intent popup. But rather than ask for an email, as practiced, it previews a poem, before inviting you to read on in the call-to-action (CTA).

In a world every marketer is copying one another and achieving similar results, it’s sometimes worth forging an uncharted path—even if that path means few opt-ins.

A campaign like the one above won’t drive more email conversions. Nor will it work on everyone. But it will keep users on your website longer, and in today’s hyper-driven attention economy, that’s only a good thing.

Like many people, I’m currently working from home. And, in an effort to safeguard my productivity, I recently decided to research programs that block certain pages on my computer. (*Cough* Wikipedia *Cough*)

That’s when I came across Freedom. While browsing its homepage, however, I came across its website popup offering 40 percent of an annual plan.

While the headline itself is compelling, what piqued my curiosity was its CTA buttons. On the left, “April40,” a coupon; on the right, “Choose Plan.”

While popups with two CTAs often reserve one for opting out, Freedom’s two CTAs, by contrast, give identical outcomes. No matter whether you click “April40,” or “Choose Plan,” both CTAs take you to its pricing page.

If, then, you’re an online retailer selling a monthly or annual subscription, consider testing one CTA versus two CTAs that result in the same action. Who knows, you might see a bump in conversions. I know Freedom did. I became a customer. (R.I.P. Wikipedia.)

I’ve written about Apuls before here. But it bears repeating because its copywriting is a work of art. From its intriguing teaser asking, “Have You Considered These Exercise Bikes?”…

… to its engaging form recommending products by budget, Apuls have mastered giving prospects what they’re looking for when they’re most engaged.

Upon closer inspection, you can see that each bike is accompanied by a recommendation relating to your budget. Offer One, for instance, boasts “high-quality at a good price.” Offer Two, by contrast, assures it’s “for those who just need to get started,” while Offer Three is reserved “for those who want the best.”

Apuls’ copy is a great illustration of the power of framing because:

If you have a product category that caters to all levels of experience, consider experimenting with a popup that has three calls-to-action based on how visitors self-identify.

I’ve written about Harry’s before here. But what I didn’t cover in that post, was a tactic so clever, it’s now my favorite e-commerce marketing strategy for activating customers.

Here’s how it works.

If, during checkout, you abandon your cart, Harry’s shows this cart recovery popup.

Let me break it down because there’s a lot going on here:

While Harry’s popup is concerned with selling a monthly subscription, you can easily tailor the tactic by “bumping” prospects to qualify for free shipping. 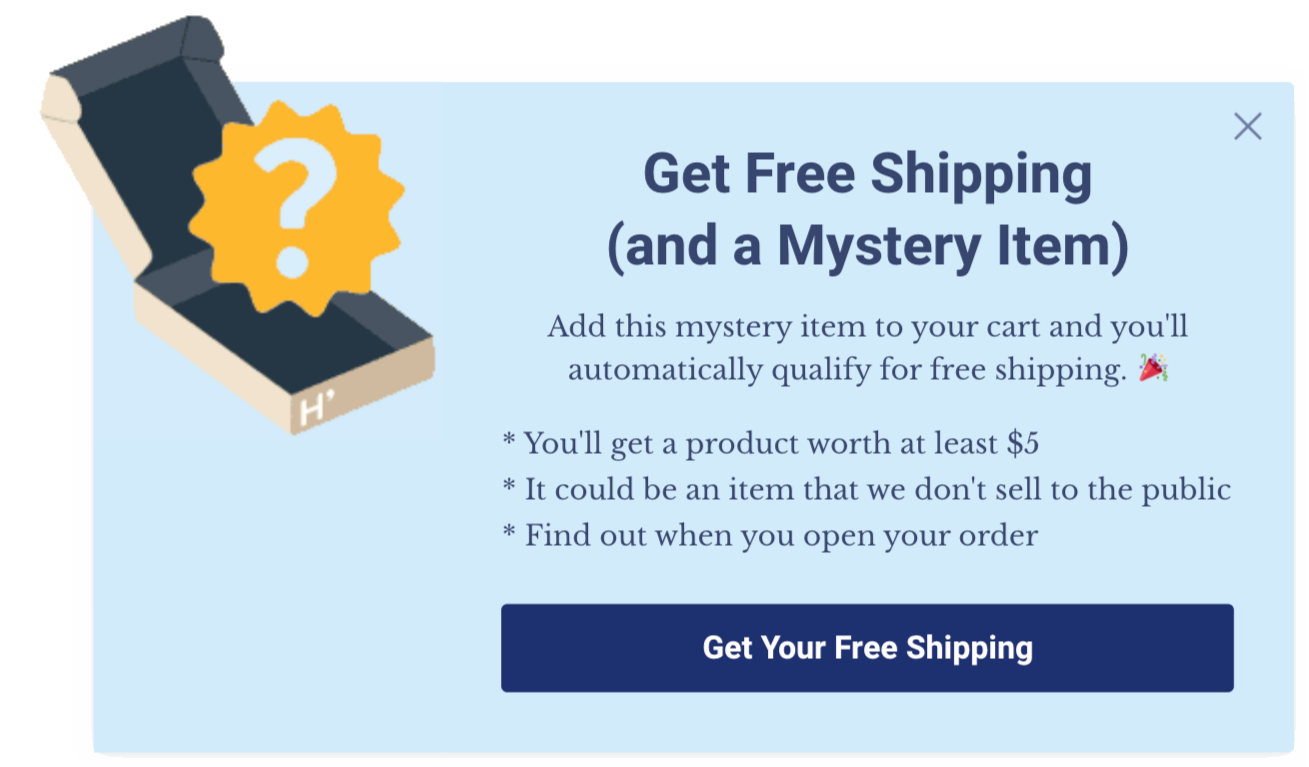 Another brand utilizing a cart recovery popup is retailer Kate Spade. However, they’re doing something I haven’t seen before (and it’s as creative as it is clever).

The brand, like Harry’s, has a popup in place for those abandoning their cart.

And at first glance, there’s nothing out of the ordinary here. You’re asked to enter your email in exchange for an incentive. But upon closer inspection, there are a few subtleties that you can easily overlook.

First, Kate Spade frames its offer as something you “qualify” for, something only a few are privy to. Next, it offers, not one, but two, time-bound benefits—benefits that are free, regardless of whether you’re a first-time visitor—and offers them at no extra cost. Third, each benefit is formatted as a bullet point for easy reading.

You don’t always need to offer freebies or discount your products. Sometimes, it’s enough to take what you’re already offering for free elsewhere and repurpose them for new visitors.

During Black Friday 2019, I was browsing online, avoiding the allure of a good bargain, hoping to snag a few good popup examples that I could feature in future articles…

And that’s when I came across the below popup from Shein.

During its Black Friday promotion, Shein offered website visitors, not one, but two time-specific coupons that they could redeem during a six-day period.

While I confess, the copy isn’t as strong as it could have been (they could have written a more compelling headline, for instance), I wanted to showcase this popup because of the brand’s inventiveness.

While other retailers offered one, generic site-wide coupon, Shein offered two, safe in the knowledge that a percentage of subscribers would likely use both, and therefore, splurge on more during the promotion.

While this tactic was used during Black Friday, it doesn’t have to be limited to the once a year holiday. You could easily adapt this strategy for any holiday or clearance sale.

Earlier, we discussed how curiosity gaps are an effective way of inviting users to take action, whether that’s adding an item to their cart or entering their email address.

But as Topshop nicely illustrates in this popup, curiosity gaps don’t always have to deliver on the promise immediately.

In its headline, Topshop warns readers not to miss out, before promising “a special treat on your birthday.” Me, being a sucker for surprises, entered my email, and forgot all about the offer.

That is until months later when my birthday rolled around (January 21st, if you’re asking), and I got this email:

When I scrolled to the bottom, I saw, spoiler alert, a discount off my next order.

Not only does Topshop masterfully close a curiosity gap they opened (as much as 364 days earlier), but they do so on the one day people are likely to be mindful of those who remembered their big day.

Not enough brands are taking advantage of wishing its customers a happy birthday. (I’m not criticizing; we’re guilty of this at Drip, too). And that means there’s an opportunity to capitalize on. Right now.

Having copy that moves readers to action should be an integral part of your business. And having good copy in your website popups is no exception.

Following good popup copywriting best practices isn’t hard. Look at what the top brands are doing, adapt the principles for your business, and you, too, will enjoy the fruits of your labor.