You don’t have to be American to have heard of Walmart greeters—the blue-vested retail employees who greet shoppers the moment they walk through the door.

Although greeters are being phased out, they’re a sound concept. They give the store a friendly feel, help customers find what they’re looking for, and they’re even happy to offer tips on restaurants and other services to out-of-town visitors. It’s great branding and it drives sales.

Popups are the e-commerce equivalent of the traditional Walmart greeter. They guide your visitors on their path to conversion, offering assistance when needed. Plus, they help you collect more leads and drive more sales.

At Drip, we know popups better than most. In fact, we recently analyzed over one billion popup views. For instance, we found out that popups with countdown timers convert at a rate of more than eight percent.

However, down the years, we’ve seen some pretty dreadful popup examples, and you probably have too. Popups that didn’t just fail to convert you, but actively put you off buying.

With that in mind, here are seven best practices to help you create high-converting Shopify popups.

1. Get Your Timing Right

2. Give People a Reason to Engage

4. Stand Out From the Crowd

6. Give Shoppers Space to Engage

1. Get Your Timing Right

In fact, one major study from Nielsen Norman Group found that modal popups—those that show up when you first land on a page, forcing you to close them before interacting with the site’s content—are the most hated form of online advertising among both mobile and desktop users:

Even retargeting ads aren’t that unpopular, and they’re basically tantamount to online stalking.

Why do people loathe modal popups so much? As far as I can tell, there are two main reasons:

That second point is key. After all, why would I hand over my email address if I’ve not even taken a cursory glance at your content?

That’s why timed triggers are so valuable.

If you’re unfamiliar, a timed trigger lets you show your Shopify popup based on how much time a visitor spends on a page. That way, they can at least confirm they’re in the right place for a few seconds before your popup appears.

While you don’t want to jump the gun, you also don’t want to leave it too long. There’s no point having a 30-second timed trigger on a page that most people only read for 29 seconds or less.

So what’s the magic time for displaying a popup on your Shopify store?

According to our research, popups shown after eight seconds convert at a rate of 3.62 percent—higher than popups shown before or after.

2. Give People a Reason to Engage

Glaucon, the Ancient Greek philosopher, declared that humans are selfish, self-interested, and egoistic.

If Glaucon is to be believed, whenever we do the “right thing”, it’s not because we really want to—it’s because we fear the consequences of being caught doing the wrong thing.

Whether or not you share his pessimistic view of humanity, it’s a fact that most visitors to your site aren’t going to give you their email address unless there’s something in it for them. That “something” might be:

Here’s a great example of this in action from Danish fashion brand Miinto:

However, your “offer” doesn’t necessarily need to cost you money. For instance, if you’re trying to drive newsletter signups, you can set out the specific benefits of subscribing, like:

Ultimately, the right “offer” will depend on your brand and audience. Test multiple options to learn what works best for you.

I’m sure Greek philosophers had lots to say about greed, too. But this is a simple point so I won’t labor it.

Naturally, you want to capture as much information as possible from your e-commerce leads. But do you really need to know their mother’s maiden name and their dog’s inside leg measurement?

Asking for too much information upfront will harm your conversion rate.

One study found form completions drop off dramatically when forms have more than three fields. What’s more, our own research found popups with two input fields convert at a rate of 3.31 percent—or 206.48 percent higher than those with three fields.

4. Stand Out From the Crowd

Unless you’ve asked a friend to print this article out for you, it’s safe to assume we’re all web users.

That means we’re bombarded with popups, not to mention countless other ads and marketing tools, every day. If you’re going to generate real results, your popups need to stand out.

Clearly, in order to craft a top-performing popup, you first need to understand what an average (or bad) one looks like. Here are some typical popup characteristics, plus pointers on how to differentiate yourself:

“Popups” aren’t just a single entity. There are multiple popup types, and the type that performs best for one brand might not work as well for you.

So it makes sense to try out as many formats as possible, right?

Fortunately, there’s plenty of scope to do just that. Just consider the online shopping experience of an average customer. They might:

There are so many opportunities to target them with popups throughout that journey. How about: 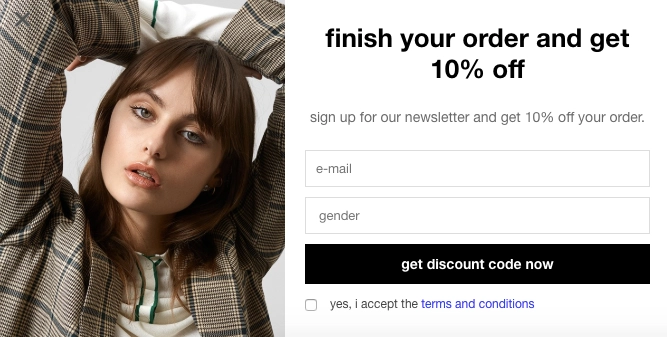 Now, I’m not suggesting you need to hit every customer with every one of those popups, every time they visit your site. But testing will show you what works (and what doesn’t).

6. Give Shoppers Space to Engage

I started this article talking about Walmart greeters, and I’m going to circle back to them for a second.

Greeters are good because they take a softly-softly approach. They wouldn’t be good if they started shouting about the store’s fantastic products and offers the second you crossed the threshold.

Shopify stores are really no different—yet that point seems to be lost on a lot of retailers. Every time you immediately display a popup when someone lands on your site, you’re basically yelling in their face.

One way around this is by adding timed triggers, which we’ve already discussed in this article. Another option is to use a scroll trigger.

Scroll triggers are pretty much what they sound like. Rather than being triggered when a user spends a certain amount of time on a page, they show up after that user scrolls a certain way down the page. That way, you’re only reaching out to people who’ve shown a certain level of engagement.

Unsurprisingly, as with timing, scroll depth is an important factor in popup effectiveness. Wait too long and you’ll effectively disqualify a big chunk of your website visitors. But do it too soon and you risk scaring them off.

Fortunately, we’ve crunched the numbers on this as well. Our analysis showed popups triggered at a scroll depth of 35 percent have the highest conversion rates, whereas those triggered at depths of 25 percent and 70 percent perform worst:

On average, an astonishing 88 percent of online shopping orders are abandoned, although rates are even higher in some industries.

That means cart abandonment is almost certainly costing you a lot of money.

One way to claw back some of that lost cash is through exit-intent popups which appear when a user signals they’re about to leave a page or bounce off your website. A well-timed popup can be all it takes to persuade a shopper to complete their transaction right now.

These popups are most effective when targeted at your shopping cart or checkout page. When a user moves the cursor outside the browser window, your popup will be triggered, presenting them with an incentive to remain on your site or give you their email address. That incentive could be:

However, you need to be smart about the way you use these powerful popups.

If a user is still actively shopping around on your site, they don’t need to be told they’ve got items in their cart. It’s interrupting their experience and nagging them to take immediate action, which might annoy them to the point of leaving.

While data can tell us a lot about the most effective ways to utilize Shopify popups, a lot of it comes down to common sense.

Don’t hit shoppers with a different popup every time they click through to a new page.

Don’t demand unnecessary information from them.

And, perhaps most importantly of all, make them relevant. Create popups that delight your customers and present them with something they actually want, rather than causing unwanted noise.

Get those simple but important things right and you can look forward to a significant uptick in conversions.